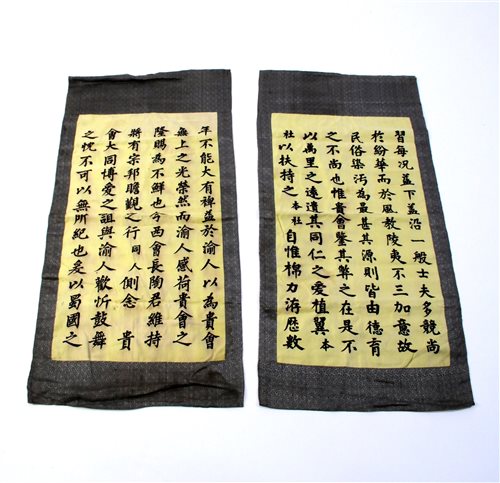 Ten various Chinese scrolls to include; a Chinese ink painting of a mountain landscape and small house in the foreground with calligraphy to the top middle and 'Le Ching Liang' written in Romanised script to the top back, the calligraphy stating 'thirty-six years of the Republic of China' (1948) and the name of the artist (Li Qingliang), two yellow silk black script panels with grey borders, originally from a three piece poetry set, gift for a person called Tao Jun who came to Chongqing City in Sichuan Province to govern the local people, a red fabric hanging scroll with gold writing, being an honorary scroll to compliment and welcome British Christian missionaries, referencing them travelling all over the world to bring teachings and culture, a black print of a boat on water, black silk scroll mount, top back bearing 'Number 109' and text with lines indecipherable but beginning 'West Garden God..', a long calligraphy scroll with a poem stating that 'poetry is my good field' referencing a love of poetry and text translating as 'student Huang Jia Liang study book', To Study is my Bright Field' in Romanised script at the back, and four landscape and figure scrolls, late Qing/Republic (10)