American Kerosene oil lamp on gimbals, believed to have been taken from USS Augusta 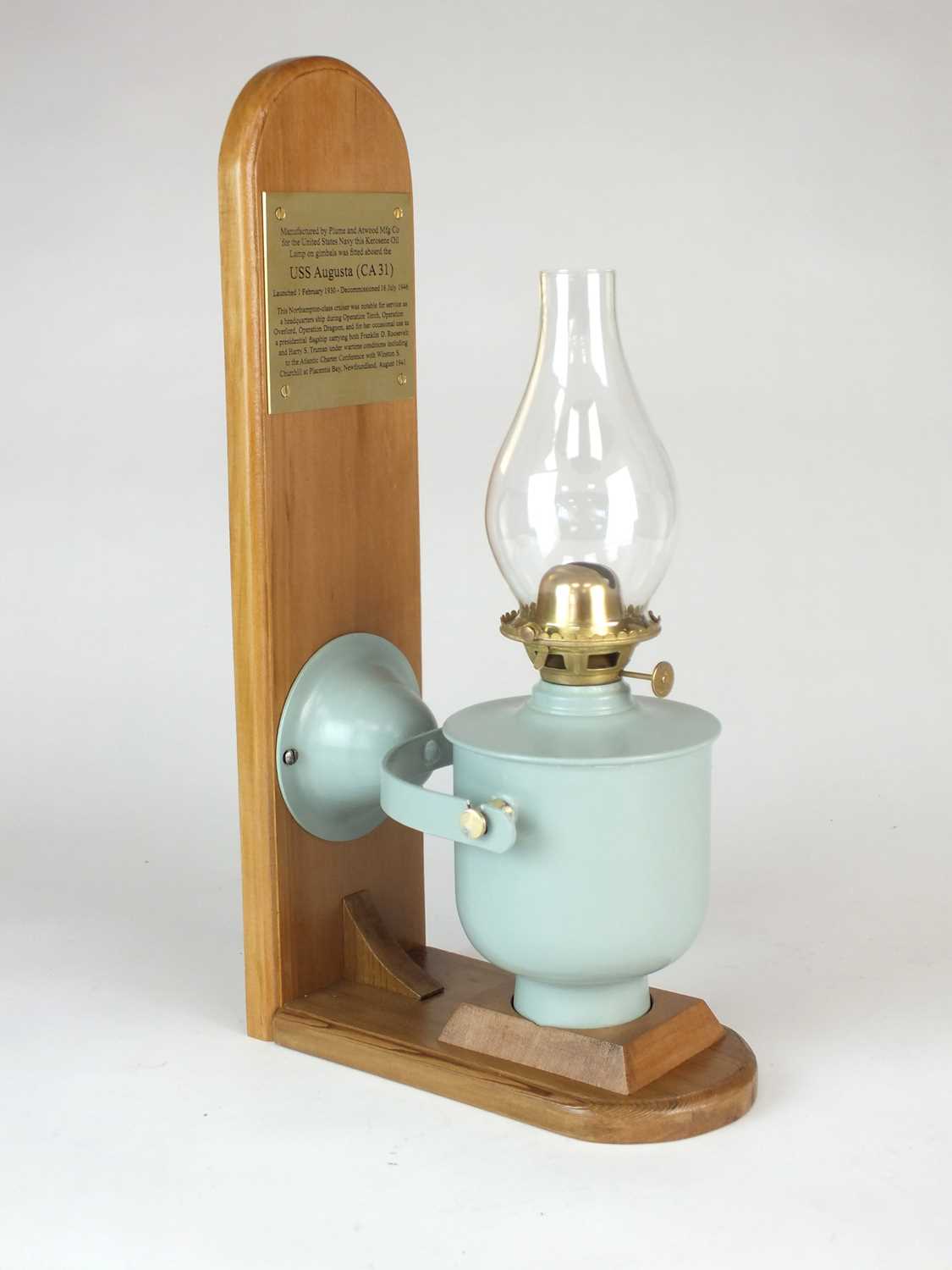 American Kerosene oil lamp on gimbals, believed to have been taken from USS Augusta

A kerosene oil lamp on gimbals manufactured by Plume and Atwood MFG Co. of Waterbury, Connecticut, believed to have been manufactured for the US Navy and used onboard USS Augusta.

This famous Northampton-class cruiser was notable for her Second World War service as a headquarters ship during Operation Torch, Operation Overlord, and Operation Dragoon alongside her occasional use as presidential flagship carrying both Franklin D. Roosevelt and Harry S. Truman under wartime conditions - including to the Atlantic Charter Conference with Winston S. Churchill at Placentia Bay, Newfoundland, August 1941.

The lamp was purchased by the present vendor’s father, together with other surplus equipment from the USS Augusta at auction in 1946. The other known items purchased were two cinema projectors and gym apparatus, the latter of which was donated on acquisition to a local College in Portsmouth. Sadly, the projectors were geared to ship’s voltage and, for technical reasons, eventually scrapped.

On 31 October 1945, the USS Augusta moored at the New York Naval Shipyard to be modified for "Magic Carpet" operations, bringing home American servicemen from Europe. Together with many other naval vessels, she performed repatriation duties through to the end of 1945 and on 7 January 1946, the vessel was accommodated in Dock 14 at Portsmouth Royal Dockyard. A copy of the Docking Register states that she was in dock for ‘Damage Repair’, and it also lists her date of departure as 1 February 1946.

The Deck Logs of the United States naval vessels were precluded from recording work carried out on a vessel or the materials used when docked at a shipyard, merely recording the date of docking and the date of departure. Moreover, at the time all work carried out at a UK dockyard on naval vessels of any nationality was governed by wartime recording and reporting restrictions. Archival research at Portsmouth Royal Dockyard suggests that any further records of detail were destroyed, together with the workforce records of those working on the USS Augusta. Five months after departing Portsmouth, the USS Augusta was decommissioned on 16 July 1946 and placed in the Philadelphia Reserve Fleet until sold for scrap on 1 November 1959.

In the absence of documentary proof but given that the European phase of Operation Magic Carpet ceased when USS Augusta docked at Portsmouth, a reasonable assumption is that without the need to accommodate several hundred returning troops there was little point in sailing back to the USA equipped for that purpose. Docking at Portsmouth would therefore provide the opportunity to strip out equipment deemed surplus to a peacetime role. Such stores would have included bunks, bedding, storage racks etc. and the means whereby troops could be entertained, e.g. cinema projectors and, recreationally occupied, e.g. gym apparatus. The near certainty is that as with other war surpluses at the time, it was auctioned by Government-appointed auctioneers - presumably in this instance on behalf of the United States Government. On docking, the Docking Register shows the vessel’s forward draft was recorded at 21ft 10ins and on departure at 19ft 6ins. Notwithstanding the fact that ‘damage repair’ may have played a part, it’s clear the vessel’s load had been considerably lightened.

Although it is impossible to confirm when the kerosene oil lamp was fitted aboard the USS Augusta, it could have been original equipment dating from the launch in 1930 as a form of emergency lighting below decks or as a form of low-level night lighting. On acquisition, it was found to have been used and from 1997 to 2017 it was fitted in the saloon of the present owner’s motor vessel. To rectify minor surface corrosion to the steel body, it was treated and recoated to match the original paintwork. On removal from the motor vehicle, it was mounted on the Western Red Cedar stand.

There is no condition report on this lot at present.  Please contact us for further details.

If you require specific information, please provide as much detail as possible below.

View all lots in this sale

Although we do not have the facilities to ship, Halls offer a limited in-house P&P service for small, non-breakable items which can be placed in a jiffy bag during the week following the auction only.  We use Royal Mail Special Delivery for goods up to a value of £2,500.  These will be shipped out Wednesday - Friday.

We charge £20 for this service.  Please call us when you have paid your invoice and we can see if we can arrange this for you.

For all other collection and delivery services, see our list below for local couriers.

Please contact them directly to receive a quote for costs. You are, of course, very welcome to use an alternative courier.

Please note that a storage and handling charge of £5.00 + VAT per lot, per day, will be levied if after a period of seven days from the sale date, items remain uncollected.

Halls Holdings Ltd. reserve the right to re-sell any items that have been paid for where appropriate after a period of fourteen days. The original buyer will be charged storage, full commission and insurance and the net proceeds remitted to them.