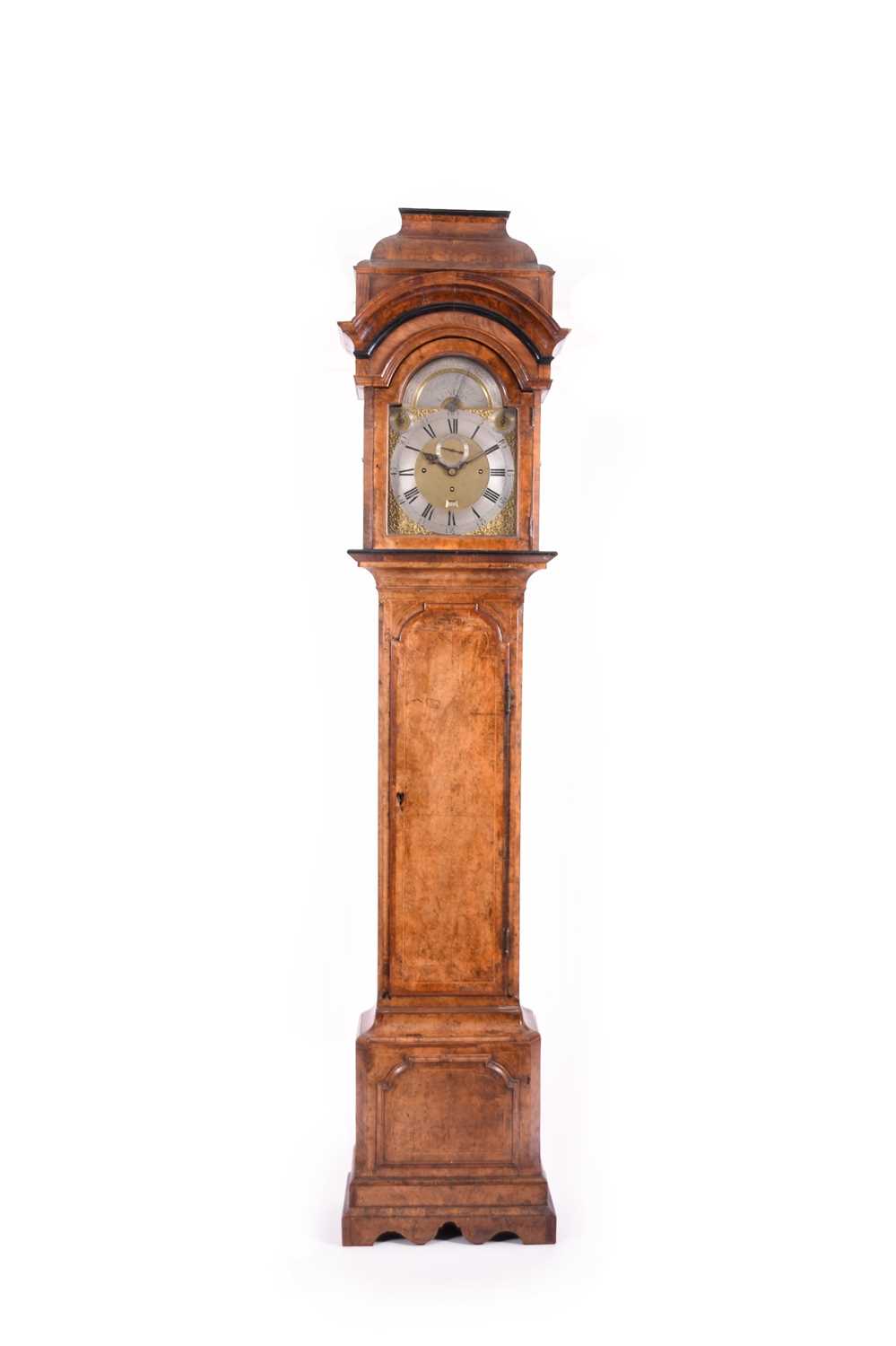 A good, rare, George II, figured walnut veneered, 8-day, three-train, chiming, musical longcase clock by John Drury, London, the hood with a cyma recta pediment above a scotia cornice, over opening side frets with overlaid, pierced brass 'foliage' and an arched door, enclosing a 13" brass dial, the silvered border in the arch engraved with 12 tunes, including 'A Minuett by Mr Handell', 'A Minuett by Mr Alland', 'The Happy Clown', 'On a Bank of Flowers', 'Richmond Ball' and 'New Grenadiers March', over the arch signed 'John Drury London', the dial below with pierced and relief moulded cherubim spandrels, silvered chapter ring with Roman numerals and Arabic 5-minute markers and subsidiary dials 'Strike/Not Strike' and 'Chime/Not Chime', the matted ground centre with a seconds subsidiary dial and date aperture, above the long trunk door cross-banded and feather-banded, flanked by chamfered corners, the conforming base with a raised, shaped panel and a shaped plinth, the 8-day movement with anchor escapement, thick brass plates, 8 pillars, 26 hammers chiming on 14 bells, playing one of 12 tunes every three hours, the pinned barrel mounted transversally on the back, striking the hours, with three original brass-clad weights and pendulum, plus winder and two keys, one an 18th century Continental key, minor damage and restorations on case, 49cm wide (hood 59cm wide) x 29cm deep x 270cm high (10)

The vendor was in the diplomatic corps and bought this clock, when stationed in Moscow, from an antique shop (a 'commission shop') in the late 1950s.

John Drury was apprenticed to his father and made free of the Clockmaker's Company on the 16th of January 1720 and operated from Red Lion Street in Clerkenwell, London.

Bonhams has sold a few examples with similar movements, including an example by George Clarke (lot 65), which was sold on the 16th of December 2020. It played 12 tunes, with 27 hammers and 15 bells, playing a tune avery three hours (like this clock by Drury), but with a 'Halifax' moon. It sold for £8,500. Also, on the 11th of July 2018 a longcase clock by Stephen Asselin (lot 40), with an additional barrel and so playing 24 tunes, made £7,000. The condition, originality and working order of these clocks is not known, however.


Case - overall a good colour and in reasonable condition, but with the inevitable chipped veeneers (including the base of the plinth) and restorations on isolated sections of veneers. Sound frets lacking small elements of brass-work.

Movement - In working order in the client's home. Recently cleaned, as the 'not strike' and 'not chime' were not fully operational.

Dial - lacking small end section on the right of the lower left spandrel.