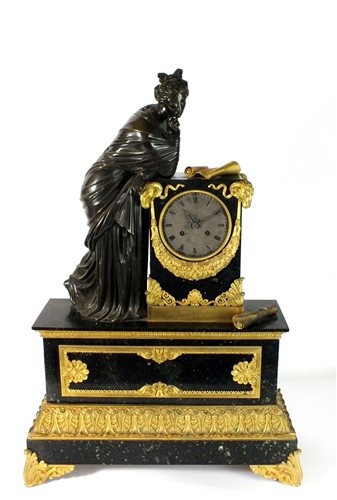 A French bronze ormolu and variegated black marble mantel clock by Honore Pons 19th century, of large proportions, the 5 inch silvered dial with roman numerals and 8-day movement striking on a bell with outside count wheel and Medaille d’Or 1827 stamp to the movement within a case cast with rams head top corners and anthemion bottom corners and an acorn and oak leaf cast swag below the dial, the case providing support for a bronze classical figure of Clio muse of History, in contemplation, raised on a substantial stepped base and plinth cast with acanthus and anthemion and stiff leaf boarders and on foliate wrapped scroll bracket feet, 80cm high, 21cm deep, 56cm wide

Footnote: Honore Pons was also known Pons de Paul and most of his signed clocks were actually made by Delpine who took over his business in the 1840s. Pons was awarded silver and gold medals in Paris between 1819 and 1839.