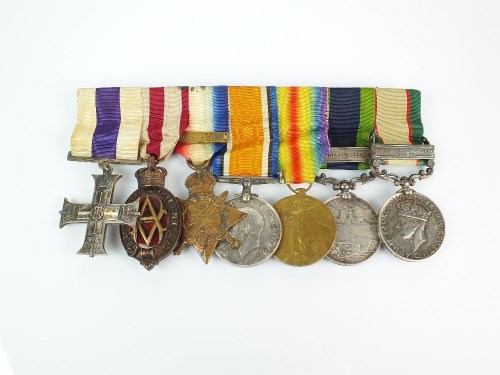 An impressive Great War Military Cross and Life saving Albert medal group of seven, awarded to second Lieutenant William Marychurch Morgan, comprising; Military Cross, G.V.R., unnamed as issued, Albert medal, 2nd class, for gallantry in saving life on land, reverse officially inscribed 'Presented by his majesty to second Lieutenant William Marychurch Morgan for gallantry in saving life at Locon in France on the 14th February 1916', Mons star with clasp '5th Aug-22nd Nov 1914', awarded to '1553 PTE W.M. Morgan H.A.C', 1914-18 War medal, awarded to 'CAPT W.M. Morgan', Victory medal, awarded to 'CAPT W.M. Morgan', India General Service medal G.V.R. with clasp 'Waziristan 1921-24' awarded to 'CAPT W.M Morgan 3-9 JAT.R.', Indian General service medal G.V.I.R. with clasp 'North West Frontier 1936-37', awarded to 'MAJOR W.M. Morgan 3-9 JAT.R', all mounted to bar William Marychurch Morgan enlisted as private 1553 in the Honourable Artillery Company, a territorial unit base in London. He went to France on 18th September 1914 and this qualified for the 1914 'Mons' star. He was commissioned on 23rd April 1915 into the Royal Welch Fusiliers and became a captain in the regiment on 9th June 1917. On 22nd April 1916 he was awarded the Albert medal for gallantry in 'Saving Life on Land' as published in the London Gazette dated 19th May 1916. Following this, as recorded in November 1916, Morgan was awarded his Military Cross (M.C.). Morgan's unit at the time of his Albert Medal (A.M.) was 15th Batt R.W.F., part of the 113 infantry brigade, which was itself part of 38th Welsh division. His A.M. was substituted by the General Officer Commanding after Morgan was initially put forward for the M.C. from the A.M. incident which took place at Locon in France. He was presented with both the M.C. and A.M. at the same investiture by H.M. King George V at Buckingham Palace on 16th December 1916. After the end of the War Morgan transferred to the Indian Army and was awarded the two Indian Service medals, here he served in the 3rd/9th JAT regiment. According to his gravestone in Jeffreyston, just North of Tenby, Morgan died a Lieutenant Colonel on 23rd October 1944 and although they do not appear to have been claimed he would have been entitled to at least two World War Two medals. A.M.- London Gazette 19th May 1916, second Lieutenant William M. Morgan, 15th Battalion R.W.F., on the 14th February 1916 during grenade instruction in a trench a men let fall a grenade which sank in the mud so that only the smoke from the fuse could be seen, Lt. Morgan, who was outside the danger zone, at once sprang forward and groped in the mud for the grenade. The difficulty in finding it added greatly to the danger. He picked up the grenade and threw it over the parapet just in time thereby saving several men from death or injury. M.C.- London gazette, dated 25th November 1916, stated that the Military Cross was awarded to Temp 2nd Lt William Marychurch Morgan for 'Conspicuous Gallantry in action on seven consecutive nights, he carried out valuable reconnaissance under intense fire and later he led a daring raid himself accounting for one of the enemy, he had previously done very fine work'.