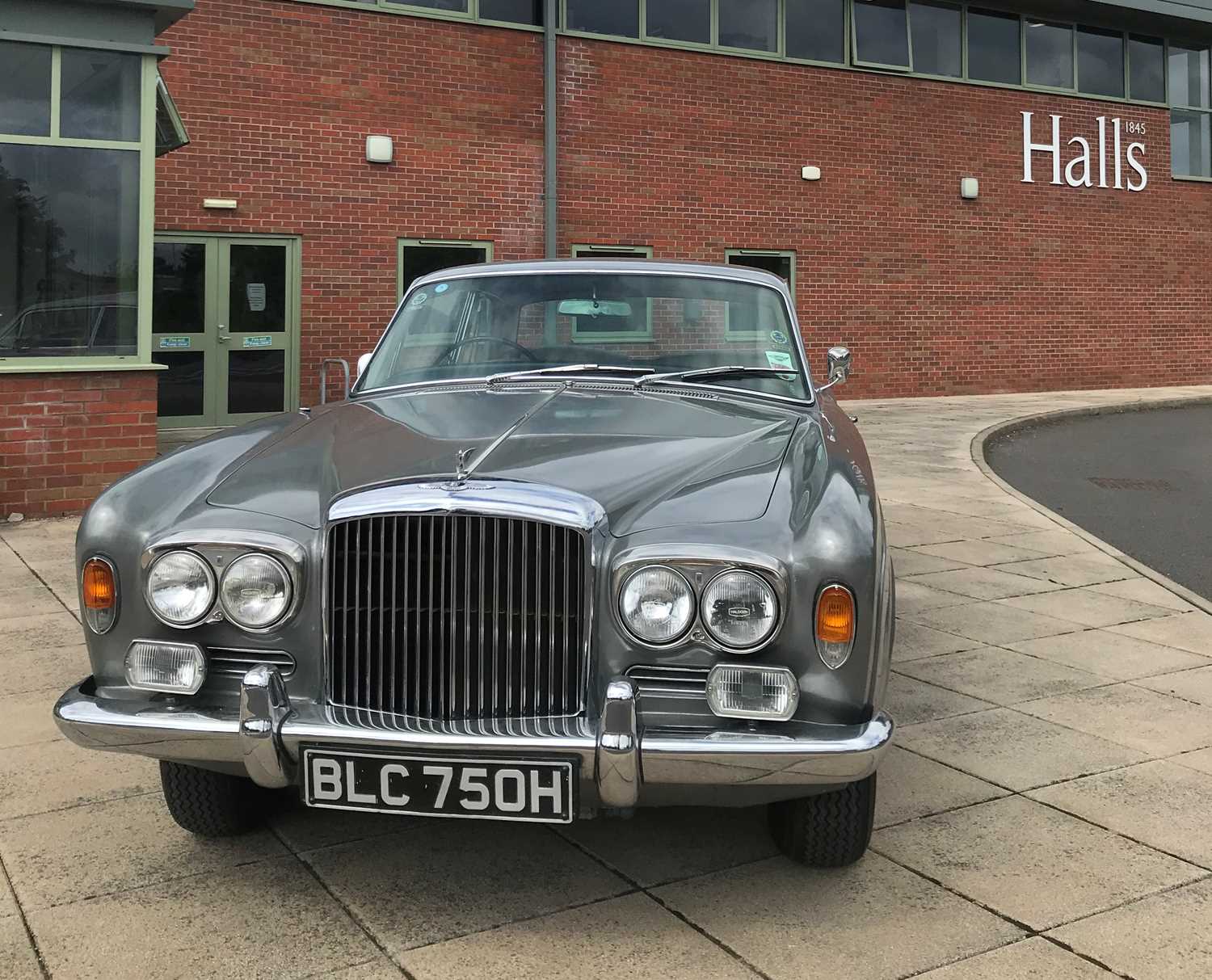 Note: The Bentley T was the Bentley version of the Rolls-Royce Silver Shadow, a total of 1868 being produced 1966-1970, the majority 4-door saloons and only 114 of them 2-door coupes, of which 1 was bodied by Pininfarina, 15 by James Young and 98, as this car, by in-house coachbuilders Mulliner Park Ward.

When launched, the more understated luxury Bentley T saloon’s pre-tax ‘list price’ of £5,375 undercut the equivalent Rolls-Royce by £50, while the price charged for a more sporting Bentley coupe was some 50% greater than that of the standard saloon.
The Bentley differed from its Rolls-Royce sibling by having a more rounded grille, while the badging on the wheel covers, boot lid and gauges naturally featured Bentley motifs rather than the Rolls-Royce logo.

Although some of the panels on a Bentley coupe were shared with the standard 4-door saloons, their 2-door body-shells featured a distinctive dipping upper wing with parallel crease, and revised, more rounded rear bodywork.

One of only 89 Bentley badged MPW coupes in right-hand drive, this statistically rare 1970 T Series 2-door 8237 was registered BLC 750H, the registration that has remained on the car to this day (confirmed in a current V5C registration document), when sold new 8 April 1970 by supplying London West End Bentley dealers Jack Barclay Ltd (their plate in door aperture) to first owner Ruth Matilda Brown of Staplefield, near Haywards Heath.

After 21 years in her care, the Bentley was purchased 06 September 1991 by second owner Peter M Afia of Hatton Grange Shifnal, before being auctioned nine years later in a Halls Fine Art sale 30 April 1999 with 83,000 mileage. The original invoice for the sale is the history file along with an impressive run of tax discs from 1971 to 1999.

Since acquisition by our Shrewsbury client however, who was therefore only the third owner, the 50 year old Bentley has only been driven a further 2,285 miles in just over 20 years (an expired tax disc from 2011 is still on the screen), having been mainly preserved in the dry sanctuary of a damp-free residential garage.

Previously repainted bodywork is clean and the chrome shines today. Patinated seat leather, which may be original, although lightly age-cracked in the front, is still soft, and the dashboard wood and door top capping are all present and correct. While after half a century, the engine bay presentation is fair for the year.

Although well stored and cosmetically tidy, the battery has been flat for some time however and the car has not been maintained or serviced recently. It is therefore being sold as seen and as a ‘Non-Runner’. The fullest professional recommissioning of all electrical and hydraulic systems would therefore be advised and the potential renewal of tyres, brake and steering components and an MOT test pass prudent before the car is driven on the public road.

This still stylish Bentley, which is categorised by the DVLA as a ‘Historic Vehicle’ and eligible for free road tax, has nonetheless been most realistically estimated.