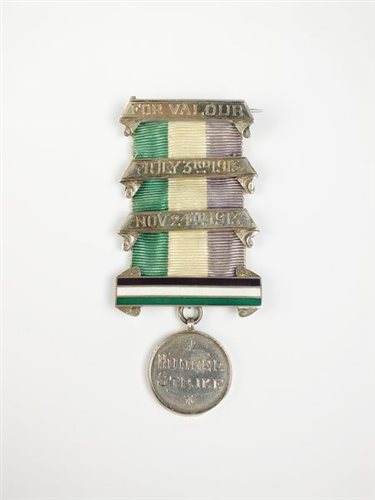 A silver hunger strike suffragette medal within original box, awarded to 'Clara Giveen', the medal engraved 'Hunger Strike' to the obverse and 'Clara Giveen' to the reverse, mounted to original green, white and purple ribbon, with enamelled bar and three engraved clasps 'For Valour', 'July 3rd 1913' and 'Nov 24th 1913', the reverse of the enamelled bar engraved 'Fed by Force 1/3/12', the box inscribed to inner cover 'Presented to Clara Giveen by the womens social and political union in recognition of a gallant action whereby through endurance to the last extremity of hunger and hardship, a great principle of political justice was vindicated, together with a miniature hammer badge engraved 'March 1912', a suffragette enamelled prison badge and a gilt metal badge 'Union of licensed vehicle workers'

Note- Clara Elizabeth Giveen, born 1887, joined the Women's Social and Political Union in 1910, she is noted for her part in the Hurst Park grandstand arson attack which took place 13th June 1913 with fellow suffragette Kitty Marion. Following this she was sentenced to three years in prison where she was forcibly fed and later released.