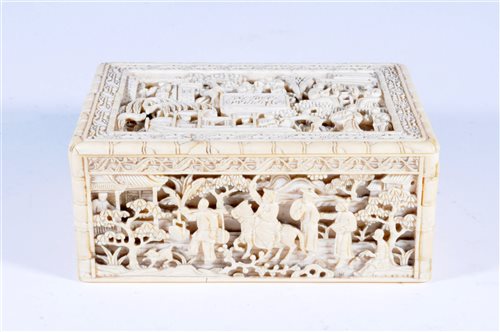 A Chinese export carved ivory gaming counter box, Canton, early 19th century, of rectangular form, intaglio decorated to the sliding cover and sides with figures on terraces, in pleasure boats and gardens, in conversation and listening to music amongst pine trees, willow and plantain, the cover centred by a tablet with italic monogram 'SBR' within faux bamboo corners and edges, revealing a lift out platform with central white metal loop handle carrying a set of mother of pearl rectangular pierced gaming counters, all monogrammed 'SBR' and decorated with figures, fruit, flowers, fish and other auspicious symbols, slight damage, the box 7.5cm x 4cm x 10cm

According to the vendor's family history, the monogram is for Spencer Browning and Rust, a London firm who manufactured navigational isntruments in the eighteenth and nineteenth centuries including octants and sextants. Established by William Spencer and Samuel Browning in 1778 as Spencer and Browning, the partnership was joined by Ebenezer Rust in 1784. By1819, all the original partners had died. After the death of Ebenezer Rust's son, also Ebenezer, in 1838, the company became Spencer Browning and Co in 1840 and was in business until about 1870