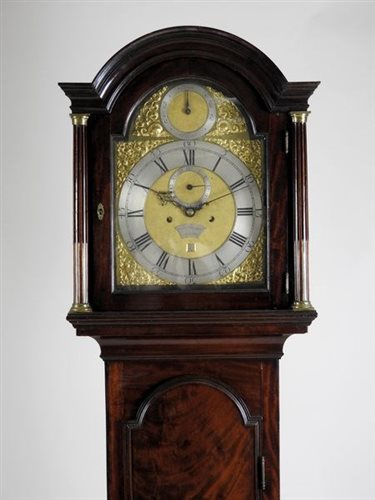 A third quarter 18th-century mahogany longcase clock with an 8-day movement by Thomas Mudge, London, the London mahogany case has a break arched hood with reeded and fluted columns with brass capitols, the straight-sided trunk has a break-arched moulded door with flame mahogany veneer, the base has a raised moulded panel to the centre, standing on a single moulded plinth, the 8-day movement has a break arched brass dial with strike/silent subsidiary to the arch, gilt mask and foliate spandrels, silvered chapter ring with outer Arabic five-minute marks and Roman numerals, the matted centre features a subsidiary seconds dial, calendar aperture and applied signature cartouche, the substantial 8-day movement is united by five knopped pillars, features bolt and shutter maintaining power, rack striking on a bell and long-shanked dead-beat escapement with a long brass crutch, 215cm high


The case is in good sound condition and shows little in the way of major restoration. There is minor cracking to the veneers throughout. Notable cracks are found on the upper left-hand corner of the trunk and some either side of the raised panel on the base. The top of the back board has been reduced in height and a panel added to the back of the hood to close the gap. This panel makes it difficult to remove the hood without catching the back of the dial. The lower-right brass capital to the hood is lacking. The seatboard is a later replacement. The dial fits squarely within the hood mask, though is a close fit, suggesting that the movement may be married to the case. The movement is sound, complete and generally in good order. There is evidence of historical poor repairs with hammer marks around some of the pivot holes and minor repairs to the strike lifting lever. The dead-beat escapement is original to the clock. The crutch is bent and requires minor repair. The movement is dusty and so will require a service before setting it running. The wood rod pendulum has an old repair to the base. The pendulum has an old repair to the base and the bob is not of the quality that one expect from Mudge's workshops. The clock is sold with two brass-cased weights, each with cracking to the brass shell.