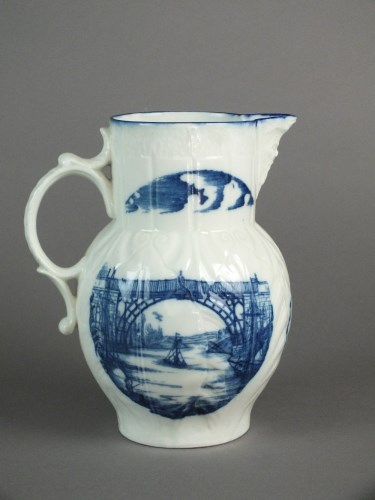 An exceptionally important Caughley mask-head jug, printed in blue on both sides with a 'Severn Trow' passing underneath the Shropshire Ironbridge, an angler in the foreground, dated 1790 and initialled JH or possibly IH, 18.5cm high Provenance: Wright Collection no. 360, purchased in 1986 from HWO, Shrewsbury. Speculatively, the initials may refer to John Hill, who was a member of the Hill family of Hawkstone who was 21 in 1790. Col. John Hill was born in 1769 and died in 1814, the son of John Hill, 3rd Baronet (1740-1824) and father of Rowland, the 1st Viscount, who never married, to his son Rowland. The Hills of Hawkstone are well known as patrons of both Caughley and Coalport Sir John Hill (3rd Baronet) was the one involved in the celebratory Parliamentary scandal and unpleasant family row about the result of the 1796 election. He commissioned the Coalport Election as a protest at the result and a campaign to get the result overturned. Sir John Hill had rejected a claimed family agreement that he would step aside for his cousin, Sir Richard Hill of Attingham, and then lost by 44 votes.